Erin and I had a really nice weekend with her brother Andrew and his wife Sara in Chicago. We flew in on Friday afternoon and after some Korean fusion for lunch went to walk around Oz park. This was close to Ba-ba-reeba, a Spanish tapas restaurant where we had dinner. We then went to a bar nearby where we met Erin's college friend, Kristen. The drinks and the conversation were great.

The next morning we went out to Northwestern University for some tailgating before the homecoming football game. It was fun to share some drinks and sausage with Andrew's friends. Unfortunately our team did not play well, but the weather was nice and it brought back memories for Erin to walk around campus.

After lunch we stopped at a whiskey distellery we like then went back to the apartment. The walking and game had made us tired, so we spent the rest of the day playing board games.

On Sunday we had time to get some brunch and then head to the zoo. I was impressed with the zoo especially since it was free. We're now getting ready to get on our plane. It was a short time, but the weather was nice and it's always fun seeing Andrew and Sara. 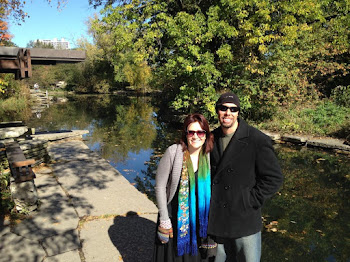